If you enjoy Get Flushed and would like to support the show, please consider making a donation to help cover our costs.  All donations are welcome - however large or small - and every cent will help us continue recording more great content. Use the Paypal button on our homepage to donate now.

Episode 1 Down the Pan

Hello and welcome to Get Flushed- the portable sanitation podcast. My name’s Pete and I’ll be your host for today’s show and the rest of the series to follow.

If you listened to the introductory episode, you will know that this podcast is about portable toilets and the people who do their business in the portable sanitation industry.

You will also know that I worked in that industry for a number of years. I hope to use the knowledge and experience to share an insider’s view and explore the myths and realities that exist in the world of portable sanitation.

Along the way, I’m going to introduce some of the friends and colleagues that I met and encourage them to share their stories and ideas and in what I hope will be an interesting and enjoyable series.

Today’s episode is about setting the scene. Everybody I’m sure will be familiar with the portable toilets plastic cabin – the brightly coloured ones with a white roof. We see these around in pretty much in every country on every continent around the world. Today, we’re going to look at the history of that portable cabin, think about how they are manufactured and put together, how they actually work and some of the common features or systems that you find in those toilets.

If we look back through history, the very first portable toilets would have been simply the nearest available space. Anyone caught short could and would, I’m sure, have found a suitable location to hoist their skirt or drop their pants and take a quick comfort break. Not particularly hygienic and not great deal in the way of privacy. And certainly not acceptable when we get into the era of the industrial revolution where large numbers of people came together in the workforce.

Historians and archaeologists have found examples of what we would describe as chamber pots from as long as the 6th Century BC. These would have been carved wooden bowls, metal containers, clay or china pots andin Victorian times a porcelain pot with a handle known as a Guzzunder, because it went under the bed. It’s not difficult to imagine chambermaids in the morning taking the filled pot and launching the contents out of the nearest window, woe betide any unsuspecting passersby.

It was during WW2 that portable toilets known as Elsan chemical toilets started to be used commonly. And we saw them in long range bombers, maritime patrol aircraft and in ship building yards. In aircraft, these were little more than a tin bucket with a lid with a good glug of formaldehyde or other strong smelling disinfectant which would suppress the smell of the wees and poos with an even more pungent aroma.

There are some great stories about Elsan toilets used by Bomber Command during World War Two on the Ted Church – Tail End Charlie website. The website pulls together a load of eyewitness accounts from the time and from reading those it would appear that those Elsan toilets were certainly a far cry from the vacuum toilets found on passenger jets today.

In ship building yards during World War Two, there was a sense of urgency that only comes with war. The ships needed to be laid down and built as quickly as possible and they didn’t have the luxury of time to allow workers to leave the ship and wander off to find a toilet on the wharf for a comfort break. That would have led to unacceptable delays in production, so cartable or craneable toilets arrived. These were generally a wooden cubicle or small shed with a toilet bucket inside. They could be lifted or craned into place and removed at the end of the job. Certainly these provided an immediate and portable solution to sanitation, but can’t I imagine they weren’t much better than the Elsan toilets found in aircraft at the time.

ment of fibreglass during the: 1950

Talking to people who worked in the industry during the 1970s, it was quite common as well to have larger toilet sheds, which were really wooden buildings with stalls inside sat upon a large tank. The toilets would empty directly into the tank underneath. These definitely provided a temporary sanitation solution, but probably weren’t terribly portable. But certainly had the capacity to cope with large crowds at things like sporting events.

Having introduced the concept of a plastic portable toilet cabin, I want to think about the way modern polyethylene portable toilets are manufactured and put together and the key components that make up the cabins that we see all around. These toilets come in a huge range of different colours and shapes, but the design and methods of construction tends to be fairly typical.

The base, tank, urinal and sink are usually made by a process called rotational moulding. That’s used because these are hollow shapes that can’t be easily pressed from a flat sheet of raw material. Smaller parts like door handles and hinges are usually made by injection moulding. That process basically shoots molten plastic into a mould and leaving it to harden and dry before the finished product is turned out.

The side panels and doors used on portable toilets tend to be vacuumed pressed. This is where a sheet of coloured plastic is pulled over a mould and then heat and pressure applied so the plastic takes the required shape. Usually these panels have got ridges in them to improve their visual appeal and give the cabin structural rigidity. If you ever pick up a panel before the cabin is assembled, they’re fairly wobbly.

There’ll be some variation, but these panels are typically joined together using aluminium pop rivets to form a fairly robust shell. Once the roof goes on, you’d be surprised at how rigid that cubicle structure becomes.

Once the walls, door and roof have been assembled, the base and toilet tank can be fitted. There are two different types of tank: the open tank or long drop. The tank has a hole in the top with a seat and if you lift the lid and look down, you will see the water and any septic waste that’s inside the toilet.

The second type is a flusher. And within that category there are generally two types of flushing mechanisms. First is a fresh water flush, which uses fresh water from a holding tank to flush in the same way as a regular toilet plumbed in at home. The second is a recirculating flusher, which has a baffle or filter connected to a pump in the bottom of the tank. Any particles are screened out and the treated water is used to flush. These pumps can be hand operated or foot operated.

Its interesting to note that flushing toilets are less popular in the United States, where most providers use long drops. And vice versa in many parts of the UK and Europe, where flushing toilets seem to be the standard and long drops less common. I think that’s situation in Europe is largely driven by fashion and by perceptions around hygiene or health and safety. People don’t want to see the mess in the toilet.

I don’t want to say much more about these different types of toilets at this stage because we’re going to look at the pros and cons and the challenges or servicing long drops against flushers at a later stage in the series.

When they leave the manufacturing plant, most of the toilets are shipped in flat pack form on pallets or in containers. That’s simply to save space and money on freight. When the units arrive at their destination, they need to be assembled, and that’s a job usually done by a team of two people. Typically speaking it takes about half an hour to assemble a standard toilet from start to finish. I have seen some teams take much longer and I know one team that could build a Meridian portable toilet in less than 15 minutes.

Ok, that’s been a whistle stop review of the history, design, manufacture and assemble of modern plastic portable toilets. And that’s probably a good place to end. In the next episode, we’ll start to dig a bit deeper and look at the logistics of running a portable toilet business. And we’ll talk to some of the people who are out there in the field servicing portable toilets today.

Thanks you for listening and remember to subscribe so you don’t miss the next edition of Get Flushed, the portable sanitation podcast. I’ve been Pete and hope you enjoyed the show.

Next Episode All Episodes 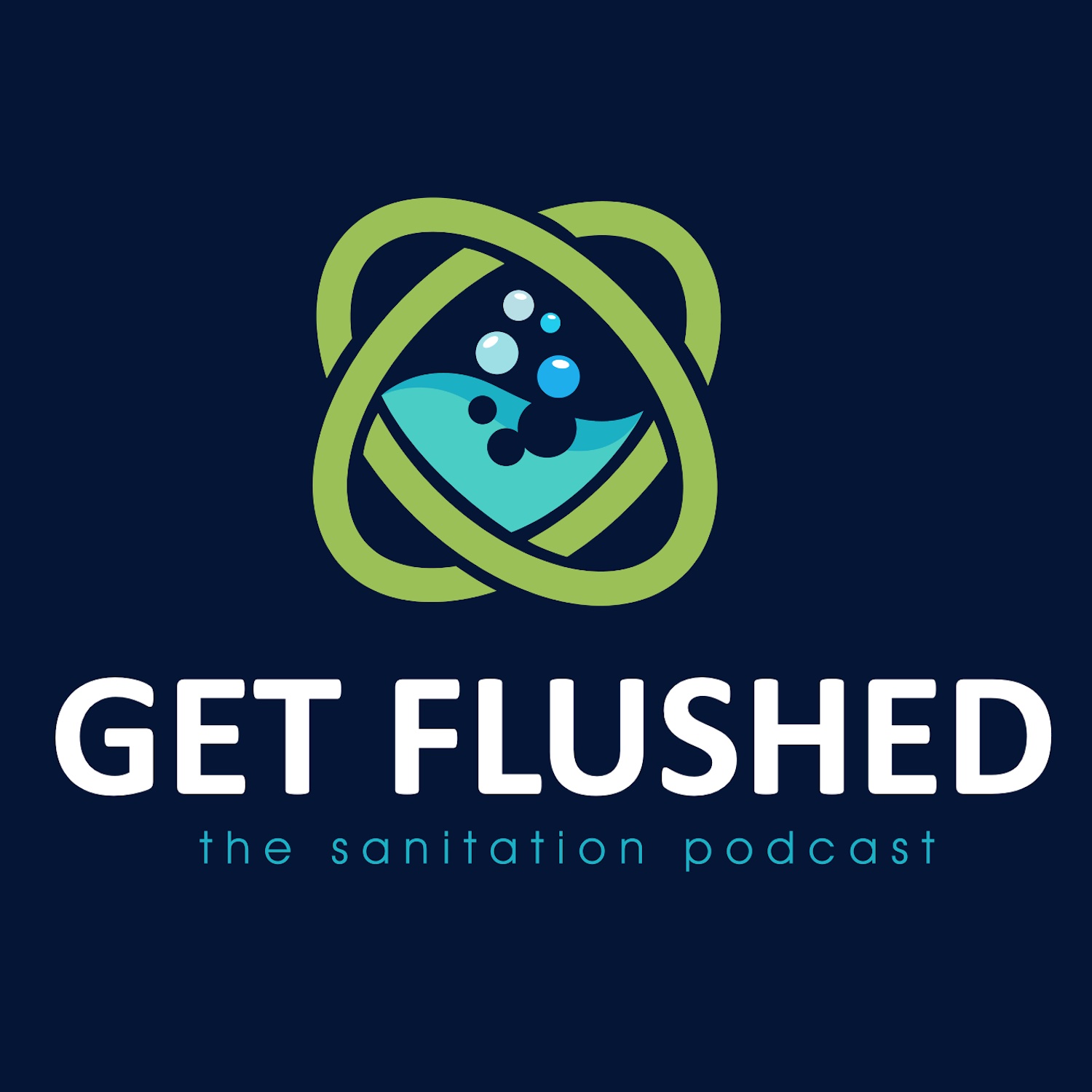 Get Flushed
The Business of Sanitation
Sanitation (the management of human faeces, urine and menstrual blood) might not sound like an appetising topic for a podcast, but the truth is, everybody has to go to the bathroom.

The lack of proper sanitation is recognised as one of the biggest threats facing the world today. The problem is not simply confined to emerging nations or remote communities. It affects us all.

Originally created to help portable restroom operators improve their performance, Get Flushed has become the place for serious conversations about sanitation. In each episode, host Pete explores the mechanics of the global sanitation industry and pushes to improve restroom standards for all.

Get Flushed shares the knowledge, skills and experiences of toilet users, manufacturers, restroom operators, engineers, researchers and sanitation champions to improve the performance of sanitation-based businesses worldwide.
Support This Show